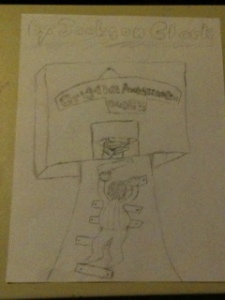 “Run!” Pete yelled. I ran…. Wait so I might as well explain what’s going on. But first I’m Jackson. Pete’s my best friend. The reason I ran?  We all have different hobbies right? Well, me, Pete, Sam, Zack, Ben, Jake, and Olivia, our hobby is origami. Why people have a problem with that is beyond me. But they do and the reason I ran was because of the class bullies Marcus, Leo, Duncan, and Jason. Who by the way have origami too and don’t get made fun of. So back to the story. I took my Origami Yoda and placed him on my finger. I ran up my tree house. Zack and Olivia were there. They’re twins. they showed me the new map they made of town. Zack took out his Origami Batman and Olivia took her Batgirl out. “Pete’s stuck at bullyville” I  said right before he ran in. “Never mind” I said.

When Summer had just began I was sooo happy. I hated that every day we had to go to school and learn things we don’t need to know. Me,  Leo, Duncan, and Jason are the only ones in our group of friends that can enjoy summer. Big Bad Bill had to go to summer school. I took my origami Darth Maul out and played with it. Leo ran toward me. “The origami light side are in the playground.” he said. I followed. “Run” one of them yelled. I walked toward him. he took out one of his lame origami. I took it and ripped it in half. He picked it off the floor and ran. I hope those jerks don’t ruin my summer.

I ran up the treehouse and quickly got a little case I used just for emergencies. Jackson saw what I was doing, he looked confused. I took my origami out and placed him in the coffin. I took the coffin and dug a small hole to bury it in. “Goodbye Mace Windu” I whispered. I took a piece of paper and did a few master folds to get my new origami. I got an origami bike and made it look as if it were on fire. I created my revenge The Spirit Of  Vengeance, Ghost Rider.

When Me, Olivia, and Zack realized what happened we were quickly surprised. We knew Marcus could go far but this… this meant war. We all went to the funeral. Sam brought his origami Kung-Fu Panda. I brought my Yoda. Olivia and Zack brought Batman and Batgirl. Ben brought his origami Indiana Jones and Jake brought his origami Ovechkin. Pete had become a whole new person. He was hyped up on getting his revenge. Right outside the treehouse we talked about origami Mace Windu for a little bit. Pete had brought Ghost Rider. A character with a flaming skull for a head and a leather jacket. He made a bike with flaming wheels and a paper chain that was so small Ghost Rider could hold it.

Me and my gang knew they would have a funeral for Mace-Punypoo. I knew that my gang would hold me down, so I went by myself. I came in a cloak so they wouldn’t know it was me.

As the funeral was ending a hooded figure came. “AHH A DEATH-EATER” Jackson yelled. (He reads too much Harry Potter). I walked toward it. Ghost Rider made me fearless. I immediately knew who it was. He took out an origami Darth Maul. I snatched it out of his hand and ripped it in two. Everyone stared at me like I was a murderer. Marcus was stunned.

When Darth Maul was killed I knew I had to avenge him. So I chased the Origami light side until I got tired. I went home. “Have you watched all the Star Wars the Clone Wars episodes” I heard. “Who!?!?…” I stuttered. “Maul” I heard. Then I knew who it was and I answered “yes I have watched them”. A thought bubble appeared above my head. (If you haven’t watched all Star Wars the Clone Wars episodes. this is what happened: it turned out that Darth Maul survived being cut in half and eventually he gets robotic legs. Then he and his new padawan Savage Opress look for Obi-Wan to get revenge for cutting Maul in half) I painted the bottom part of Darth Maul silver and taped him back together. then I made an origami Savage Opress.

The next day I walked up to their treehouse. This time with my gang. Duncan brought his Darth Paper. Leo brought Count Dooku. Jason brought General Creasious. We were gonna end this for all. I brought our whole collection.

When Marcus and his gang came it was immediately a code red. We came down with our origami to defend our base. That’s when the battle came to life. Our origami jumped off our fingers and started fighting.

When the battle began these five sith ran toward me. Yoda was right by me and helped defend from there attacks. Nick Foldy was shooting at those who went past our army. I saw X-Wings, Y-wings, and Quinjets fighting Ties and AT-AT. Suddenly one of the sith came forward toward me. I disintegrated his arm with my chain. He and the other sith backed off. As I looked around the battlefield I realized my partner Yoda had been killed. “We will have our revenge” the sith yelled as they boarded an escape pod. Soon after they had realized their leaders had left the dark side fled.

After The Final Battle

When I found out about Yoda I quickly made an emergency one in his place. We held a funeral for Yoda and like the fifty dead clone troopers. Nick Foldy created us a new defense helicarrier.